The fifth and final guest post in the series published on the UK Web Focus blog is written by Anna Sakoyan and Irina Radchenko. In this post Anna and Irina describe “Data Expeditions and Data Journalism project as OER in Russian“.

Data Expeditions and Data Journalism project as OER in Russian

As the availability of education enhances internationally, in particular through the development of OERs and informal educational projects, predominantly in English, similar trends appear in other language environments. By their nature, they are less available for the contributors from all over the world, but at the same time, they often provide the only participation opportunity for those who for whom the English-language sources are not an option due to the language barrier. What seems important here is to create such projects in a way that makes them both their language audience-oriented and integrated into the international knowledge exchange.

Our online educational project DataDrivenJournalism.RU and its data expeditions are an example of an attempt to adopt this approach.

Before we discuss the details of this particular project, we find it necessary to introduce the context, in which it was born and is currently developing. Basically, there seem to have been three deficiencies, or aspects to the problem, that we tried to address in this way.

First off, in the spring 2013 there was a surge of interest in open data among the Russian media, primarily due to the fact that the government was about to open its data officially. Many journalists turned to this subject, simply because it was promoted and supported by the state, so it was a discussed topic by default. Following the coverage, their audience was becoming aware of this kind of developments, but there was little understanding of what exactly it was about. Before the official move, there was some Open Data movement in Russia, but it was mostly promoted by a relatively small group of citizen activists and IT-developers with little response from the broader audience. All in all, by the moment when open data were about to be introduced officially, the bottom-up initiative was really scarce and with deplorably weak horizontal connections.

Second, there is a lack of Russian-language projects for those who might be interested in learning how to deal with data from scratch. Clearly, there were programmers’ communities and some of those were rather enthusiastic about building open data-based applications. But outside this scope, there were journalists, citizen activists, and scholars who could well make use of the new developments, but had no sufficient technical skills, nor even the idea of where to start acquiring them. While there are numerous international English-language learning projects of this kind, they are hardly available for those with a considerable language barrier. So there was a need for translated or newly created Russian-language manuals, as well as some supportive environment, which would encourage people to learn something really new.

Third, and most general, the project seems to comply with the trend all over the world. When there is a considerable number of open materials (books, manuals, tutorials), as well as open/free tools, and there are people who are trying to use them, at a certain stage there is also a demand for further structuring and adaptation of such materials and tools for learning. This means not only collecting relevant links in one catalogue, which is sometimes very helpful by itself, but creating something more interactive that could provide more comfortable learning facilities.

DataDrivenJournalism.RU and its data expeditions 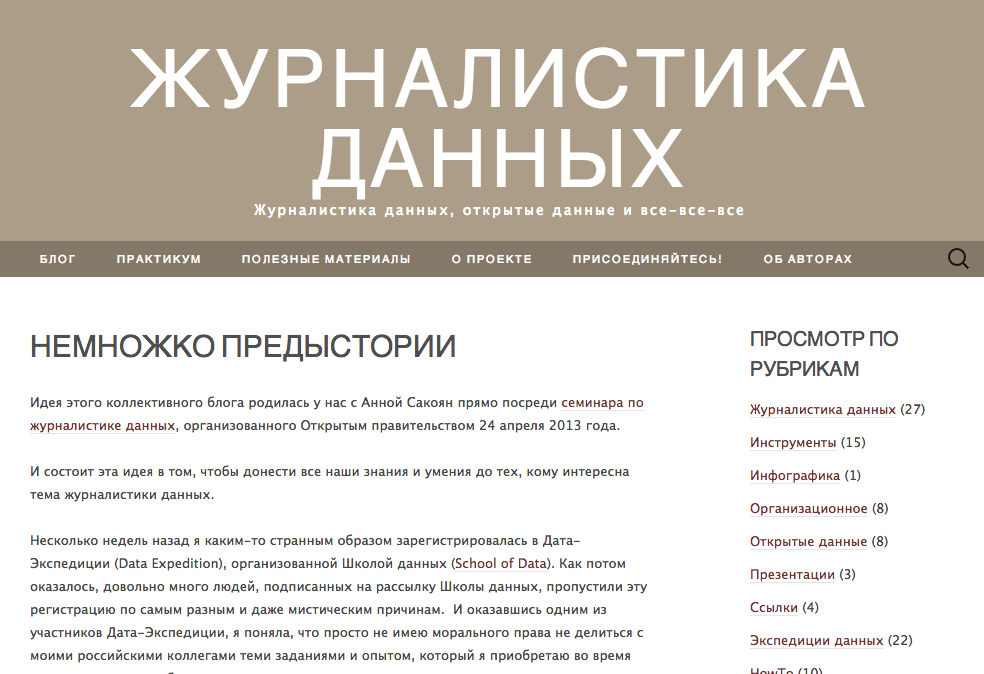 DataDrivenJournalism.RU was initially created as a blog to accumulate translated or originally written manuals on working with data. Its mission was formulated as promoting the broad use of data (Open Data first of all) in the Russian-language environment. As the number of the published materials was growing, it was necessary to structure them in a searchable way, which resulted in making it look more like a website. After almost a year of its existance, the functioning of the project appears basically twofold. On one hand, it operates as an educational resource with a growing collection of tutorials, a glossary and lists of helpful external links, as well as the central platform of its data expeditions; on the other hand, as a blog, it provides a broader context of open data application to various areas of activity, including data driven journalism itself. 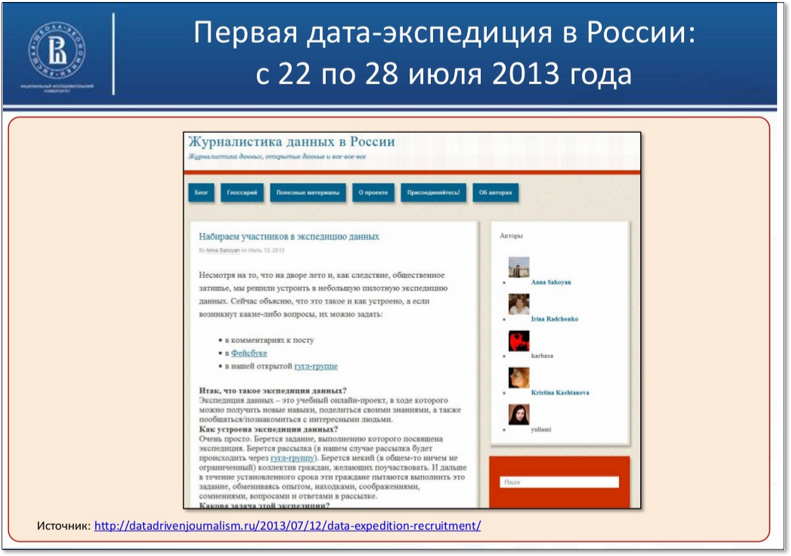 Being inspired by the School of Data example, we decided to try such format as online data expeditions soon after the blog was created. The first Russian-language Data Expedition (DE1) was launched in July 2013. It was a week long and its objectives were searching, processing and visualizing datasets on universities, both Russian and international. The review of DE1 was published on DataDrivenJournalism.RU http://datadrivenjournalism.ru/2013/08/04/first-russian-data-expedition-report/ (in Russian). Its English version can be found on Anna’s blog http://ourchiefweapons.wordpress.com/2013/08/05/first-data-expedition-in-russian-mission-complete/.

Our Second Data Expedition (DE2) launched in December 2013 was based on working with data collected in 2013 within a survey that was conducted by PSRAI Omnibus (http://www.psrai.com/omnibus.shtml). This dataset can be found at PEW Internet & American Life Project site: http://pewinternet.org/Shared-Content/Data-Sets/2013/July-2013—Online-Video-%28onmibus%29.aspx. It was chosen due to its clear structure and lots of variables in the first place. DE2’s main idea was to get beginners to try working with data in a friendly and encouraging environment. Unlike DE1, which heavily relied on self-organisation, DE2 had a ready-made scenario for those who might find it difficult to conduct their own research.

The review of DE2 can be found at DataDrivenJournalism.RU: http://datadrivenjournalism.ru/2014/01/02/de2-report/ (in Russian) and on Anna Sakoyan’s blog: http://ourchiefweapons.wordpress.com/2014/01/04/second-data-expedition-in-russian-mission-accomplished/ (in English). 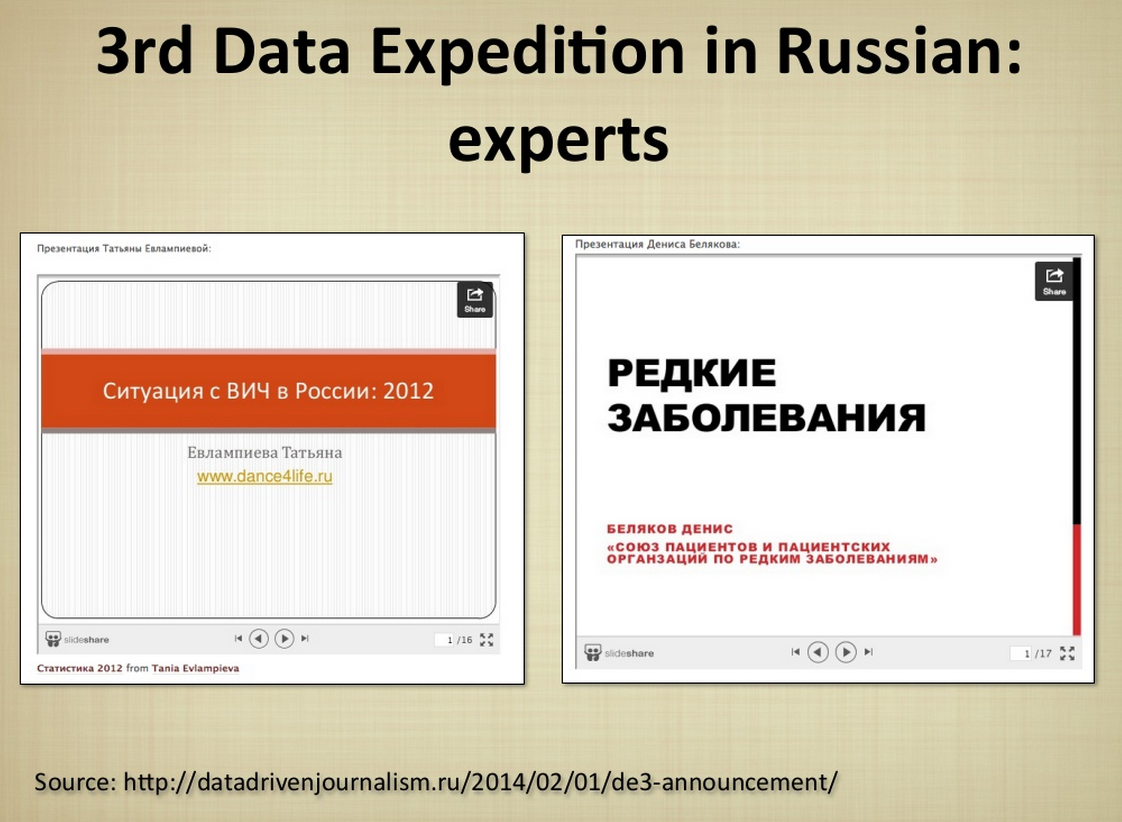 Our most recent Data Expedition (DE3) had a special feature. This Data Expedition was dedicated to researching the subject of orphan or rare diseases. DE3 was organised in a partnership with NGO “Teplitsa of Social Technologies” so it was a joint project. They helped us to involve experts in the fields of rare diseases. The active participation of experts was an invaluable part of the research, because they provided extremely helpful navigation on the subject. This was the first time we have seen the combination of peer-learning and research in action. We are planning to publish the review of this DE3 in the near future. Right now, its participants are working on creating the follow-up digital story based on the findings.

Undoubtedly, data expeditions being a combination of a peer-learning project and a hackaton can be an extremely helpful tool not only for learning (and teaching) data processing techniques, but also for researching particular areas of knowledge or life posed as the subjects of these expeditions. In this respect, data expeditions could be a very flexible promising format equally applicable to things like an activist campaign or an educational project.

DataDrivenJournalism.RU was created as a response to the two former challenges, because it was designed to accumulate and generate the Russian-language learning materials and also to contribute to building a community of people interested in learning more about making sense of data. As to the latter, an interactive approach was implemented through the Russian-language online data expeditions as a subproject of DataDrivenJournalism.RU.

However, this is only one side of the project. Like any other open educational resource, DataDrivenJournalism.RU can’t exist in a vacuum. It needs to be integrated in broader OER networks and open data communities, both Russian-language and international. It might be some interaction on the basis of knowledge or experience exchange; it might be participation in international data expeditions or other project-based peer-learning projects. Due to the flexibility of open projects, the variety of cooperation formats is virtually great.