When Two Tribes Go To War

Niall Sclater, Director of the OU VLE Programme at the Open University recently pointed out that the Slideshare service was down, using this as an “attempt to inject some reality into the VLEs v Small Pieces debate“. His colleague at the Open University, Tony Hirst responded with a post entitled “An error has occurred whilst accessing this site” in which Tony, with “beautifully sweet irony“, alerted Niall to the fact that the OU’s Intranet was also down.

Similar differences of opinion are taking place at the University of Leeds. My former colleague Nigel Bruce send me a wall-to-wall post on Facebook some time ago in which he expressed the view that “Personally I don’t see the point in ISS (the IT Services department) running blogging servers unless we want to automatically create and populate groups based on modules. Why not just encourage people to sign up for an account with WordPress? It’s better than anything we could offer. Much better than Elgg. This area is moving so fast no Uni computing services can hope to compete or keep up.”

But Melissa Highton, a colleague of Nigel’s will give a talk on Monday at UKOLN’s “Exploiting The Potential Of Blogs And Social Networks” workshop on Leedsfeeds: a Blogging Service based on the Open Source Elgg Application in which she will describe the benefits of running a local open source blogging service (Elgg) to support the aims of the institution and members of the institution.

Two tribes with, it would appear, fundamentally differing perspectives – but not, I hope, about to go to war.

Myself and my colleague Paul Walk had been invited by CETIS to facilitate a half-day session on Responding to Change and Institutional Challenges at the conference on Beyond Standards – Holistic Approaches to Educational Technology and Interoperability. In our planning for the session it struck me that the tensions between the views held by Tony Hirst and those of Niall Sclater would provide a useful way of exploring the institutional challenges of the Web 2.0 characteristics such as ‘the network as the platform and commercial providers of services.

I must admit, though, that I hadn’t expected both Tony and Niall to attend the session! This was an opportunity not to be missed, and so the session provided an opportunity to explore the tensions openly articulated by two of the participants.

Peace In Our Time?

Niall Sclater has already written about the session in a post entitled VLEs v Web 2.0: is consensus breaking out? As Niall summarises in his post: 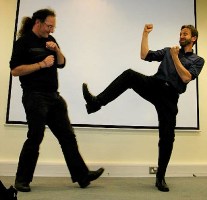 I suspect Brian Kelly took great pleasure in attempting to pitch Tony Hirst against me in a session at the JISC CETIS Conference yesterday (photo: Mark Power). Brian had spotted that I had been promoting the benefits of institutional VLEs while Tony is pushing the boundaries in the use of Web 2.0 software for learning… After the session I caught up with Tony over a pint and we looked at whether there is any common ground in our thinking and, not surprisingly, there’s plenty (though Tony may now deny it!).

More seriously, though, participants at the session did actively engage in exploring the ‘gaps’ between the commercial and institutional provision of services (which I wrote about recently). And I have to admit that my previous thoughts that the gap needed to me addressing my policies, risk assessment, managing expectations, etc. have been modified as a result of the discussions at the session, and I now wonder whether it might be better to sometimes leave such gaps unfilled. For as ‘Webdunc’ recently commented “To oversimplify; I don’t think I’ve ever heard of a policy for what to do when you pass a peer/colleague/superior/lecturer/student in the street – why do we need one for online social behaviour?“.

Conclusions From The Session

Facilitators of the workshop session had been asked to summarise the conclusions in a single sentence. I must admit that I’m not convinced how useful this is – although I would acknowledge that it can provide a useful exercise for the participants in seeking consensus.

But although the conclusions may appear bland, I think they reflect the sentiments expressed by Oleg Liber, Director of JISC CETIS, and Sarah Porter, Head of Development, JISC, in the opening presentations at the conference.

And, finally it is possible, I feel, to enhance the impact of this sentence.