The ‘Quiet Zone’ At Conferences

Earlier today I booked a place on the Eduserv Symposium 2010: The Mobile University which will be held at the Royal College of Physicians in London on 13 May 2010.

The online booking for the event uses the Eventbrite service – and as this Cloud service is free for free events it is ideal for events such as the Eduserv Symposium. I should also add that UKOLN also uses the service for its workshops for the cultural heritage service.

When completing the online registration I was interested to read how the event organisers (including my former UKOLN colleague Andy Powell) are addressing the use of social media tools (with technologies such as Twitter likely to be widely used on the day) including the implications for those who may, for whatever reason, not be users of or fans of use of such technologies at events:

We will be live streaming sessions from the Symposium and encouraging attendees to make use of social media throughout the day. By attending, you accept that your image may appear in photographs or videos made during the course of the event. There will be a limited Quiet Area where the use of social media is limited and where no photography or filming will take place. You can indicate your preference for being seated in this area below.

At last year’s Institutional Web Management Workshop (IWMW 2009)  we introduced a Quiet Area which was intended for “those not so keen to participate in use of mobile devices and networked technologies“.  We went on to add that “This area will also be appropriate for those who would like to avoid being filmed during the video streaming“. 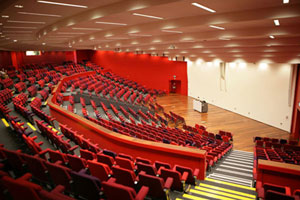 The quiet zone was physically located in the back five rows of the conference auditorium and, as can be seen from the accompanying photograph, was clearly differentiated form the main row of seats.

We alerted IWMW 2009 delegates of this new aspect to our IWMW annual series of events (which has been an ‘amplified event’ since we first made use of WiFi technologies in 2005) in advance of the event and provided an Acceptable Use Policy which, rather than providing a list of what was or was not permissible, we summarised as “Don’t be stupid“.

The background to the provision of the Quiet Are was provided in a post entitled “How Rude! Use Of WiFi Networks At Conferences” which I wrote in May 2008. In my post I reported on experiences at an internal Open University conference during which an official live blogger “was told by three different people in separate sessions to stop as his typing was offputting”.

But how should one address the preferences of the minority who do feel that people using laptops, netbooks or mobile devices during conferences can be intrusive and distracting? The approach taken at IWMW 2009 was to allow delegates to chose to sit in an area free from use of such devices.  The quiet zone also provided an areas for those who did not wish to appear on photographs taken during the event or on the live video stream – we instructed the official camera crew to avoid pointing the camera at the back of the lecture theatre  and asked the official photographer not to take photographs of people sat in that area. We also made a similar request to the event delegates, many of whom would also be taking photographs during the presentations.

I got the impression that our provision of the Quiet Area at IWMW 2009 was appreciated by the delegates as a pragmatic approach to reconciling the tensions between those who were appreciative of the benefits which event amplification can provide and those who have concerns.

I’m therefore pleased to see that this approach is being adopted at this year’s Eduserv Symposium.  I’ll be interested to see how effective it is – I should add, though, that on the booking form I have stated that I do not intend to sit in the Quiet Zone. It will also be interesting to see if this approach becomes used at other events – such as the JISC 2010 conference and the ALT-C 2010 conference. There’s a need, I feel, to observe emerging patterns of best practices for the provision of amplified events.