Rapper Sword and the Social Web 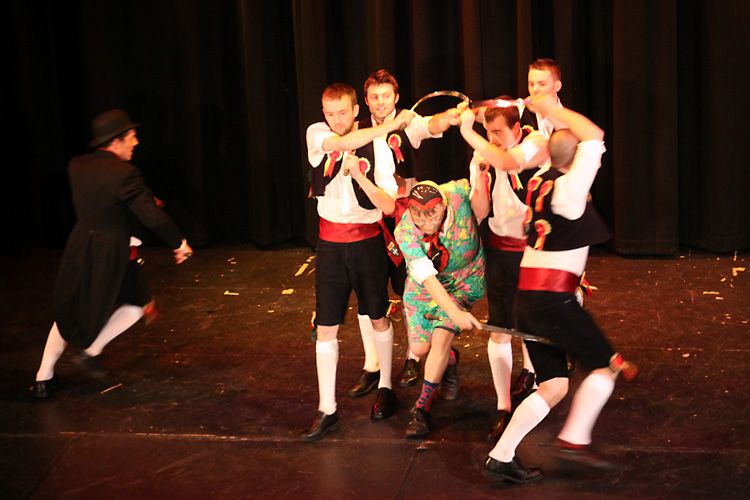 I spent the weekend in Derby competing in the annual DERT 2010 rapper sword dancing competition.  I first start dancing rapper in 1978 while I was at Newcastle University and since 1979 have  been a comic character (the ‘Betty’) for the team, the Newcastle Kingsmen Sword Dancers, on a regular basis ever since. During my 30 years of dancing the dance I’ve seen rapper sword grow in popularity, a rise in the number of female teams, increasing numbers of overseas teams and, over the past few years,  I have noticed that the quality of the dancing has improved tremendously, with the embarrassment of the local collapsing becoming unusual. I’m also starting to see technologies being used across the rapper community and thought it would be worth summarising such developments and the potential for further use of networked technologies.

If you haven’t come across rapper sword dancing before how would you find out about it? Information about the dance is available from the Rapper Online Web site. However Wikipedia is likely to be a place which people will use to find information about the dance. This was a reason I created the entry on Rapper Sword back in 2004. But as well as helping people to find out about the dance, I also created the page in order to learn about Wikipedia. This also allowed me to gain acceptance as a trusted Wikipedia contributor.

Another place where people might expect to find information out the dance is Facebook. There is a Rapper Sword Dance Facebook group – but that has failed to develop a community and little information is provided there.

Many rapper teams will, of course, have their own Web side. The Rapper Online provides a list of rapper teams in the UK and elsewhere (teams exist in the US, Canada, Norway, Belgium, New Zealand and Australia).

The Rapper Online Web site provides a gallery of photos (and links to galleries provided by rapper teams). It also has links to videos of rapper sword dances.

However, as might be expected with the growing numbers of people who own some form of video camera (perhaps on a mobile phone) a greater range of video footage can be found using a YouTube search for “rapper sword”.

Although sharing videos is now fairly commonplace, I don’t think there is much use yet of GPS in the rapper community, apart, perhaps, from using a SatNav in a car when travelling to folk festivals.

On a recent trip up to Newcastle  the Kingsmen had organised a Saturday dancing crawl which started off in Chester-le-Streeet and made its way to Gateshead.   This provided an opportunity for to to try out the GPS capabilities of my Android phone.  I used the MyTrack application to record the start of the crawl, which I subsequently uploaded to Google Maps.

Unfortunately as I was concerned that use of GPs would drain the phone’s battery I didn’t keep of a record of the full crawl (which began at about 1 pm and finished after midnight). I would like to use this application again the next time I’m on a dancing crawl.

On Saturday, rather than having the GPS on as we went from pub to pub around Derby for the competition spots I tried out a social location-sharing application – Gowalla. I signed up for this service recently and used it to geo-locate the various pubs we went to. This provides a Google Map of the places we visited. But unlike MyTracks, Gowalla can display other people who have checked in to the same location. You can also see the checked in location for your friends. So when people disappear off during the lunch spot, either for a sandwich or to visit another pub, if the dancers, many of whom who will own a smart phone, it would be possible for the team’s squire to know where the dancers are, without having to resort to sending text messages as is the case now when there are last minutes changes to arrangements.

What the rapper community hasn’t yet done, I feel, is to establish a tagging strategy to make it easier to find photos and videos. Perhaps we should promote “rappersword” for tagging photos and videos and ‘DERT2010’ for the weekends event (note that the community doesn’t seem to be using Twitter, so there’s no need, I feel, to recommend the shorter ‘DERT10’).

I mentioned previously that DERT (Dancing England Rapper Tournament) the annual DERT 2010 is the annual competition for rapper sword dancing. The scoring system has evolved over the years, with marks being awarded for Stepping, Sword Handling, Dance Technique and Teamwork, Buzz Factor, Presentation, Music and Characters. But who won? The answer is that my team, the Newcastle Kingsmen won the Premier class and the Steve Marris trophy. In addition the Kingsmen Tommy and Betty (including myself as the Betty) won the comic character prize and we also won a prize for the best calling-on song. A fun weekend 🙂

NOTE: The first image in the post was replaced on 12 April by a photograph taken in the final competition dance at DERT 2010.