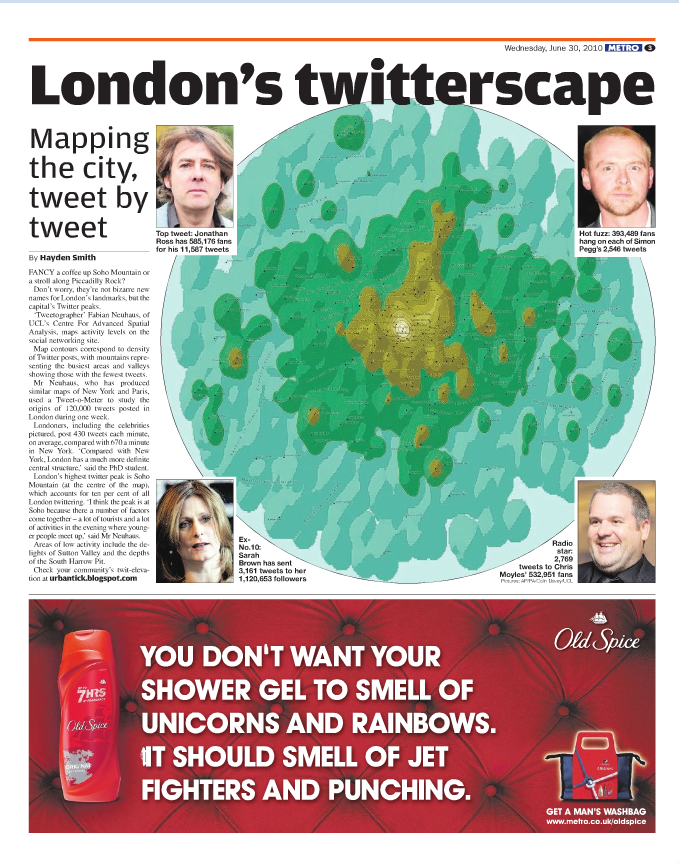 A recent article in the Metro (published on 30 June 2010) described “London’s Twitterscape” and included a visualisation of the location of tweets posted in London.  The article was based on research being carried out at UCL and – as can be seen – this works shows the density of tweets around London.

On the other hand there may be occasions when geo-locating Twitter posts may have advantages.  At next week’s IWMW 2010 event, which will be held at the University of Sheffield on 12-14 July, we will again be making use of Twitter to support the event amplification to a remote audience. But when we analyse the event tweets, or people view individual tweets,it is not normally possible to identify if the tweet has been posted by someone who is at (or near) the near or located hundreds if not thousands of miles away.  A knowledge of the location of those joining in the discussions centred about the event hashtag can help to identify the extent of the event amplification and assist the planning of provision and support for future amplified events.

A simple approach to helping to identify the location of those tweeting would be to encourage participants to geo-locate their tweets.  I suspect that not many Twitter users currently geo-locate their tweets. This might be for a number of reasons, such as the concerns over privacy and security which I have already mentioned. But in addition users may not know how to switch on geo-location of tweets on their generic antibiotics online Twitter client on their mobile device (or, indeed, if their preferred client supports this feature).

Following a recent request on Twitter I discovered that geo-location of tweets is possible on Gravity on a Nokia N97 and ?bertwitter on the Blackberry (and the accuracy settings are configurable for some variable levels of privacy). In addition TweetDeck and the official mobile Twitter client also support geo-location and I suspect many other mobile Twitter clients will also do so.

The user interface for geo-locating tweets using Tweetdesk is illustrated. In addition the interface for TweetDeck on an Apple Macintosh is shown below.

If you are attending IWMW 2010 and intend to tweet during the event this will provide an opportunity for you to test the geo-location potential of Twitter.  And since you are away from home on work business you should not be divulging personal information, such as the location of your home.

If you are intending to participate in the #iwmw10 discussions as a remote participant it would be useful for the event organisers to be able to easily find out details about the geographical distribution of the remote participants.  After all there are resource implications in providing a live video stream and support the remote audience and, in light of cuts, we may need to be able to provide evidence that such expenditure can be justified.

If you are participating from home, though, you may wish to consider whether you are prepared to share such location information publicly.

Does this use case seem reasonable? And how do you feel about publicising your location in a machine-readable format when you are attending events, either physically or remotely?