I recently carried out a reader survey for this blog.  But in addition to such valuable anecdotal feedback I also feel it is useful to complement such surveys with objective metrics which provides answers to questions such as “How was this blog used in 2010?“; “ What were the most popular posts?” and “Where did the traffic come from? “.

I’m pleased to say that for blogs hosted at WordPress.com, an automated summary was sent to blog owners recently. Here is a summary of their report. Note that while I’m unconvinced of the merits of the images I felt it was particularly interesting to see that “the top referring sites in 2010 were twitter.com, Google Reader, facebook.com, ukoln.ac.uk, and google.co.uk“.  A few days ago TechCrunch published a post entitled “Twitter And Facebook Really Are Killing RSS (At Least For TechCrunch Visitors)” It seems that a significant volume of traffic to the UK Web Focus blog is also being delivered by Twitter and Facebook.  Is  this a matter of concern, as suggested by the title of the TechCruch article?  I’ll explore this issue in a forthcoming post.

By the way if you search for the opening words in the message: “The stats helper monkeys at WordPress.com mulled over” you’ll be able to make comparisons with other blogs which have published the message from WordPress.com.

The stats helper monkeys at WordPress.com mulled over how this blog did in 2010, and here’s a high level summary of its overall blog health: 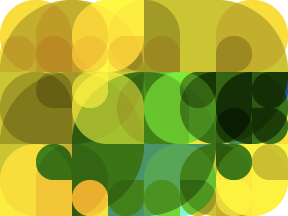 A helper monkey made this abstract painting, inspired by your stats.

The Louvre Museum has 8.5 million visitors per year. This blog was viewed about 87,000 times in 2010. If it were an exhibit at The Louvre Museum, it would take 4 days for that many people to see it.

The busiest day of the year was November 16th with 811 views. The most popular post that day was University Web Sites Cost Money!.

Where did they come from?

The top referring sites in 2010 were twitter.com, Google Reader, facebook.com, ukoln.ac.uk, and google.co.uk.

These are the posts and pages that got the most views in 2010.

Have You Claimed Your Personal And Institutional Facebook Vanity URL? June 2009
11 comments

Best UK University Web Sites – According to Sixth Formers August 2010
10 comments and 1 Like on WordPress.com,